The IC reactor is the expanded granular sludge bed reactor. It is a third-generation anaerobic bioreactor developed on the basis of the UASB reactor. It recirculates the effluent water and greatly increases the rising flow rate of sewage. The granular sludge is always in an expanded state, which strengthens the contact and mass transfer between sewage and microorganisms, and obtains a higher removal efficiency. The height of the reactor is as high as 16-25 meters.

The inlet water at the bottom of the reactor, granular sludge and the mud-water mixture returning from the gas-liquid separation zone are effectively mixed in this zone.

The mud-water mixture formed in the mixing zone enters the zone, and most of the organic matter is converted into biogas under the action of high-concentration sludge. The upflow of the mixed liquid and the severe disturbance of the biogas make the sludge in the reaction zone expand and fluidize, which strengthens the surface contact of the sludge and the sludge maintains high activity. With the increase of biogas production, a part of the mud-water mixture is lifted by the biogas to the gas-liquid separation zone at the top.

The biogas in the lifted mixture is separated from the muddy water and exported to the treatment system. The muddy water mixture returns to the lowermost mixing zone along the return pipe, and is fully mixed with the sludge and influent at the bottom of the reactor to achieve the Internal circulation.

The reactor has a high volume load

The hydraulic residence time of the reactor was correspondingly shorter

No hysteresis setting filler, save the cost, increase the volume utilization ratio

The structure is simple and the operation is convenient 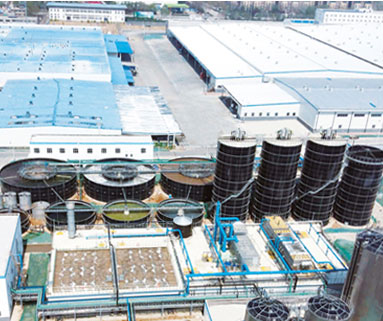